Hello there! This, as you may have noticed, is a creepy text generator. It converts normal text into creepy text with all sorts of weird and distorted markings (ll̵̜̈́i̵̙̽k̶͚̎ȅ̷͇ ̷̙̈t̸̙̃h̸͙̓į̴͗s̵̺̿). You can copy and paste these spooky symbols into your social media posts so that you look like you're a l33t hacker, or perhaps so that it looks like your text is cursed, or you're posessed (by Unicode demons).

So how does is this scary text actually produced? And how are you able to copy and paste it? After all, a normal font doesn't allow you to copy and paste it between different websites, right? Well, as it turns out, this isn't a "creepy font" - instead it's an abuse of Unicode "modifying characters" to create creepy text. These are characters that are able to be "added to" an existing character. It's like how some languages have marks about the letters to specify that it's pronounced in a different way, or whatever. So with this creepy text generator, we just add a lot of these markings, because as it turns out, there's no limit to the number of modifiers that you can add to a character! If you add enough of these diacritic marks, the text starts to look pretty creepy and weird. Amazingly, it can also start slowing down your computer because it takes so long to render all the little marks.

This style of creepy text is also known as "zalgo text", and here's an explanation of how it works, if you need more details.

You should know that some social media platforms automatically filter out all the weird symbol markings, or prevent your from posting the creepy text because it can be disruptive to other users (including slowing down the page, like I mentioned previously). So if it doesn't work when you copy and paste it somewhere, that may be the reason. 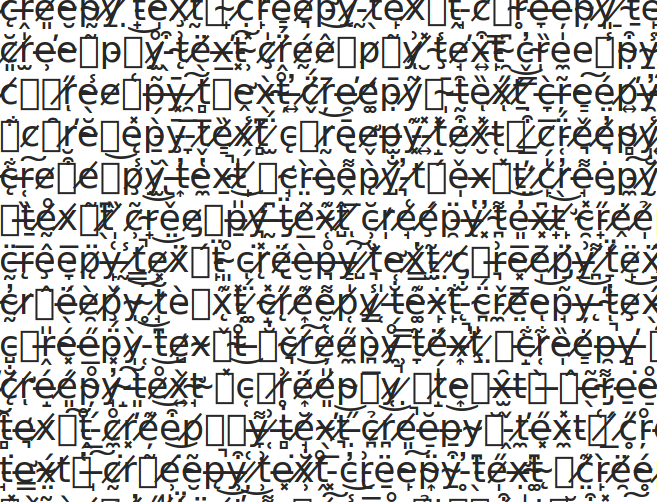 Here's a classic Garfield comic from the original Zalgo meme: