This translator converts text to Morse Code. It also generates audio so you can listen to your sentences in morse code. Simple enter words or sentences in the left-hand text box, and your text will be translated into morse code.

Morse code is a method of transmitting textual information by using an on/off signal like a flashing light of beeping sound (it is somewhat similar to transfering information in binary). It was originally used by emateur radio operators, air traffic controllers, and the military. The length of the beep or flash determines what type of signal is being transmitted. When using audio for morse code, the terms "dits" and "dahs" are used to refer to short beeps and long beeps, respectively. The textual representation of a "dit" is a dot or period, and the representation of a "dah" is a dash or hyphen.

This translator does translate English to Morse code. However, Morse code can be used for any language that uses the Latin alphabet - and there are variations which allow for more than 26 characters and 10 numerals. The modern version of Morse code is known as "International Morse Code". This specifies internationally agreed-upon alphanumeric codes: 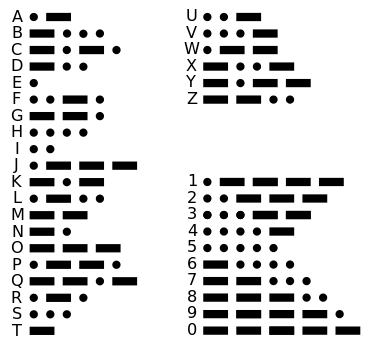 Special thanks to Eric Holk for sharing his JavaScript solution for making the morse code audio by using the WebAudio API.