So they're not actually "fonts" per se, but rather, sets of characters that look like the normal alphabet characters (or numbers). That's why you're able to copy and paste them. If they were actual fonts, you'd need to somehow copy the whole font file as well, which doesn't really make sense.

So, really this generator should probably be called "letter symbols" - but "letter fonts" gets the point across fine, and it's what most people search for when they Google this sort of thing, because the various fancy alphabet symbols do actually look like different fonts, so people just assume that's what they are.

You might notice that some the the letter fonts don't work 100% - for example there may be weird box symbols in place of where the actual character should be. If that happens, then that means you browser doesn't yet support all the Unicode symbols of that particular alphabet. You may also notice that when you try to copy and paste some symbols into a social network, that it doesn't let you, or that it filters out the special characters. Unfortunately that just means that the social network has banned certain Unicode characters - probably to prevent people from using different letter fonts like these ones to make their posts stand out.

Some of the fonts are quite close to the normal alphabet - for example, the cursive ones, the monospace ones, the bold and italic ones. These were actually introduced as separate Latin alphabets in the early days of Unicode for use by mathematicians and other academics (to create equations where the different styled letters have different meanings). And then I've included a bunch of other letter fonts that are very much "pseudo-alphabets", meaning that they look like the normal Latin alphabet in some way (maybe you have to squint for some of them!). This latter type were created by going through all the Unicode characters and finding various symbols and characters that look a bit like the normal characters in the normal alphabet.

I didn't create all the pseudo alphabets in this generator - some of them come from various places around the internet. But I've tried to compile as many of them as I can together into this one page, and have invented many of my own to try and have a letter font for every possible purpose :) 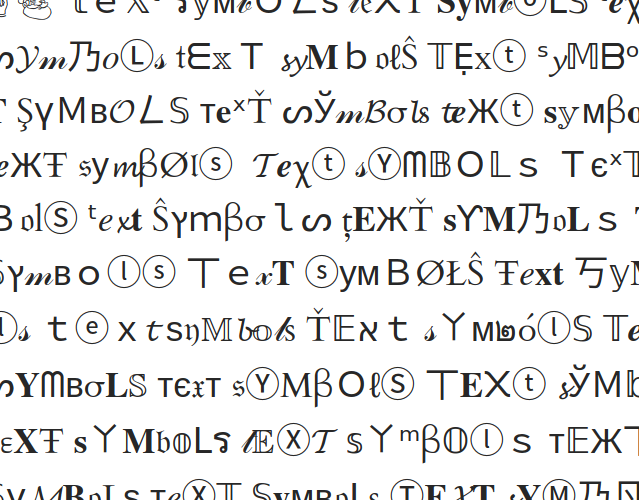