This is a simple hacked text generator. You can use it to convert normal text into crazily messy hacked text, and you can control how messed-up you want it to be with the slider at the bottom of the second box.

How does this hacked text stuff work? Well, you know how some languages have the marks above some characters? Like how "cliché" has a mark above the "e". Well, there are a tonne of languages that use these types of markings, and some languages have all sorts of rules with multiple marks per character, so a single character could have a dozen different forms. So rather than saying that we'll have a separate character for every possible configuration of marks, the computer people who designed the way that text works on computers decided that they'll just have the "base" characters like a, b, c, d, etc. (including all the base characters from other languages), and then they'd allow people to "modify" these base characters with these special "modifier" characters that are applied to the base characters. And they decided that they wouldn't put any rules in about how many modifiers could be used on each base character, because some languages may need a lot of modifiers. So this generator "hacks" the text by applying all sorts of random modifier characters to the text that you input! Fairly simple, really.

Note that some people call this stuff "cursed text", which would make this a cursed text generator.

It seems silly that they don't put a limit on the number of allowed modifiers, but the fact they they don't means that we can have some fun pretending we are l33t hackers :3

You should be able to use the generated hacked text all over the place including Discord, Amino, Reddit, YouTube, Instagram bio, Twitter, Disqus, and almost anywhere else you can paste text, so give it a shot! Just type some text in the first box and then copy the messed up / hacked text from the second box (after perhaps adjusting the level of hackedness) and paste it into a text input form. Note though that some websites have banned it or limited the number of modifiers that can be submitted.

Anyway, if you like this "text hacker/messer" thing, leave a comment below! I'm always up for creating new generators and converters so let me know! 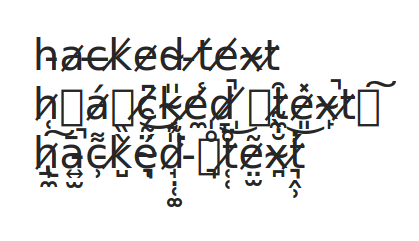 That's an image of what this text glitcher produced in the second box when you type something in the first box.

Does anyone read these descriptions?