Hello! So you're looking for some fonts that you can use in your tweets? You've come to the right place! This page is a simple twitter font generator that'll allow you to use all sorts of fancy text characters within your tweets to help them stand out. Thanks to the huge number of different letters and symbols in the Unicode specification, we're able to construct a bunch of different "pseudo alphabets" - that is, textual alphabets of Latin-esque characters that can be used in place of the actual ASCII characters (like the ones you're reading right now).

Unicode began in the 1980s with a few employees from Xerox and Apple realising that everyone in the computing industry was creating their own custom-build text encodings. This was a bit troubling because text representations had somewhat stabilised at that point, and so it was creating an unnecessary communication/translation overhead whenever two programs with different text representations wanted to "talk" to one another. So Unicode attempted to solve that by creating a "global rulebook" for text encodings.

Unfortunately it's pretty hard to get people to update all their legacy systems to a new standard, and so Unicode had to make a bunch of hard decisions around consistency and "neatness" that eventually went in favor of sacrificing those properties in order to speed up adoption of the new standard. So this is why Unicode is so "messy" - it has many duplicate characters, many strange characters that no one ever uses any more, and a bunch of holes where there should be characters, but currently aren't. But in general Unicode has been a great thing for the world - that's for sure. They gave us emojis! And of course, they have us Twitter fonts.

These "fonts" are generated by converting normal ASCII characters (which are the first 128 Unicode characters - so all ASCII character are Unicode characters) into symbols from throughout the Unicode standard that roughly resemble those normal ASCII characters. Many of the symbols generated are from mathematical blocks, since those alphabets were added to Unicode in the early days to help mathematicians communicate through mediums where a markup language like LaTeX or HTML wasn't available. But the Twitter fonts generated here also use a huge range of symbols that aren't actually "semantically" related to the Latin alphabet, or Arabic numerals. Instead, they're visually related - they have similar shapes. This is similar to "l33t speak" which uses visual similarities between numbers and letters to create a pseudo alphabet.

If you have any suggestions for new Twitter fonts that I should include, or if you've got an idea for a different converter, please share that feedback in the suggests form, or the comments! 𝓣𝓱𝓪𝓷𝓴𝓼! 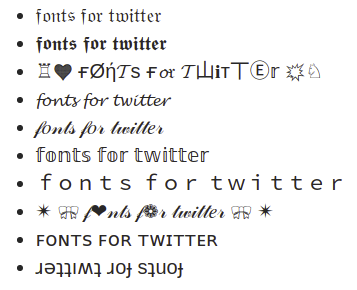